Be in the know about 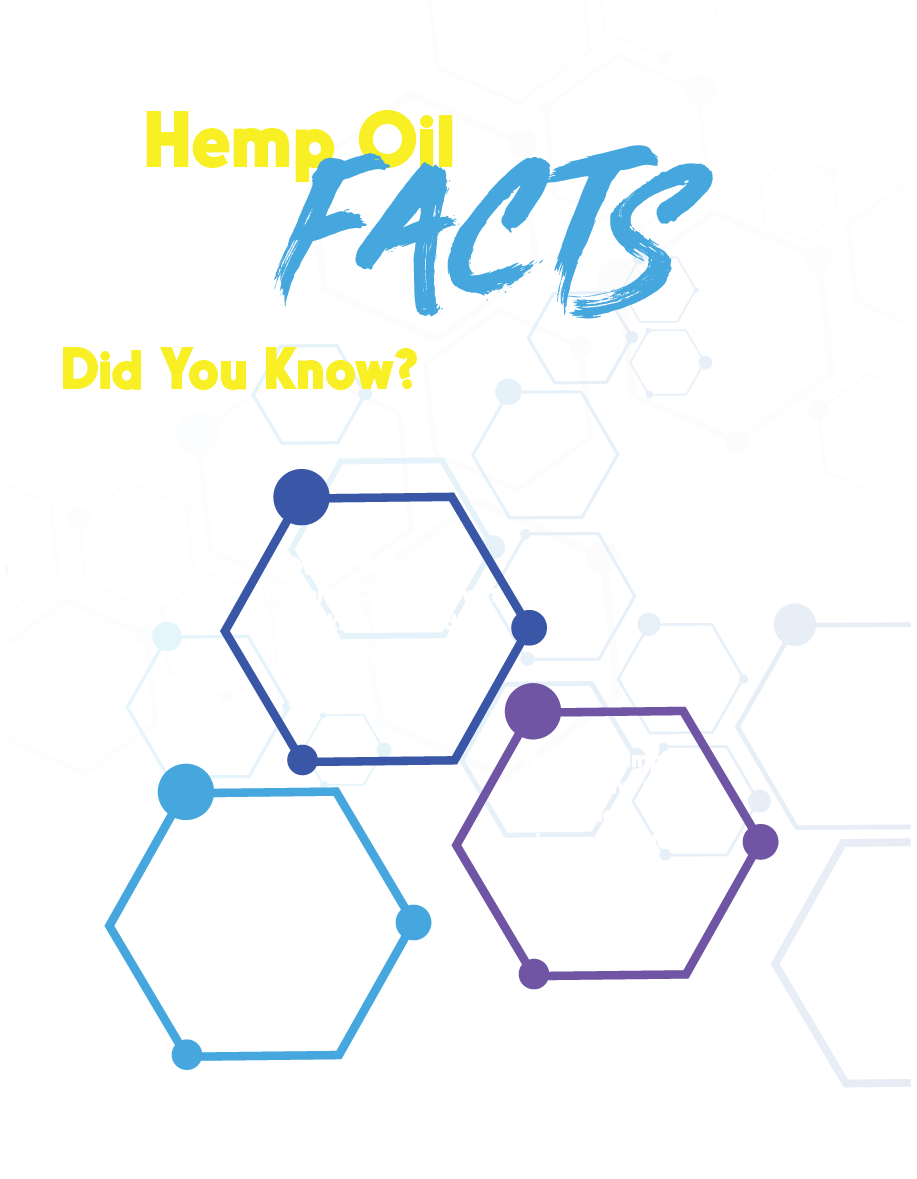 Did you know? Science supports the premise that Hemp is beneficial to human health. A growing number of scientists and healthcare professionals are exploring the potential of Hemp for promoting well-being and overall health. Their findings are published in scientific and medical journals.

Our unique, patented REMEDY Technology™ significantly amplifies Hemp absorption into the bloodstream and achieves the desired response by the body. This key aspect of GEMINI
product helps to ensure predictable and consistent results. 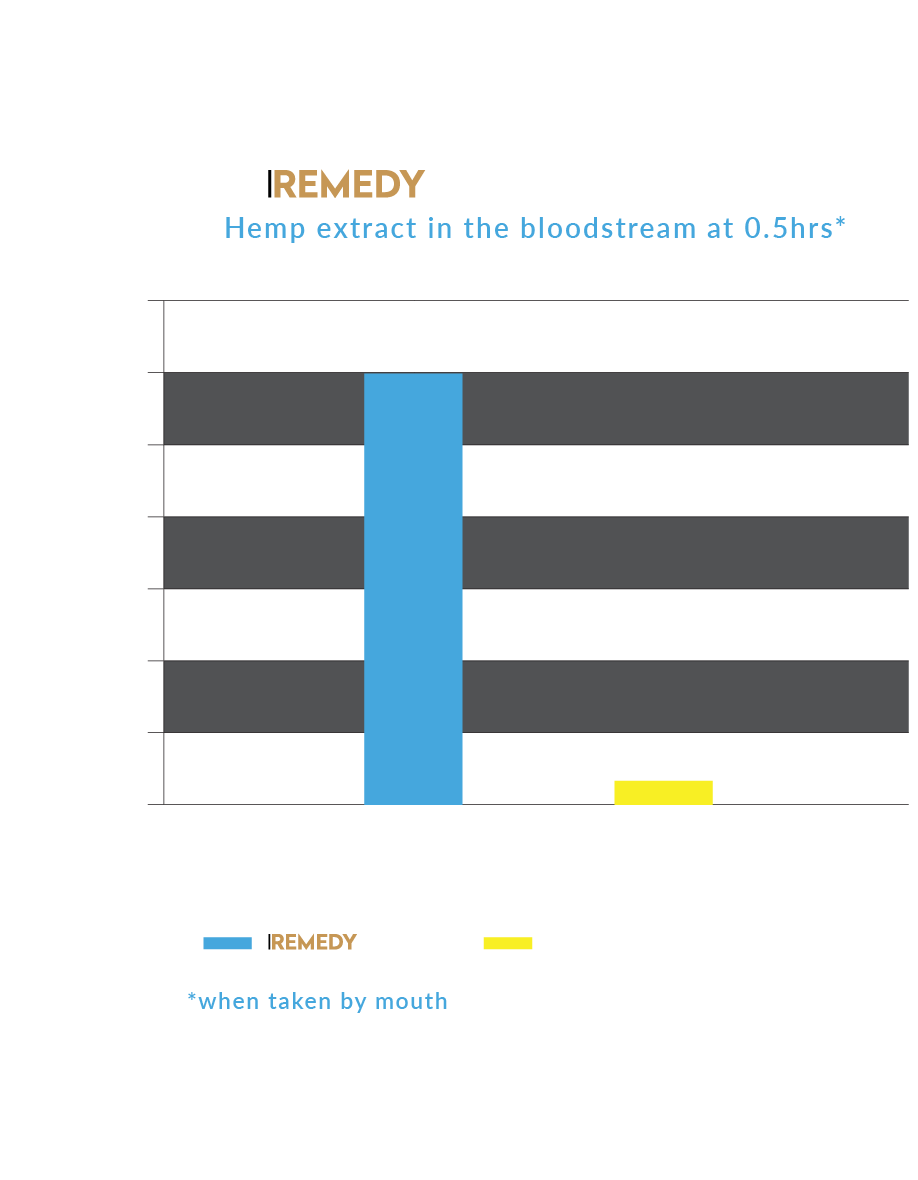 PURE, NATURAL Hemp
The demand for Hemp has skyrocketed as consumers have learned more about it. Still, Hemp remains a scarce, very expensive commodity. Quality and quantity are in very short supply, as the small amounts available typically are of questionable content and low Total Bioavailability. Fortunately for consumers worldwide, GEMINI stands ready to provide vast quantities of the highest-quality Hemp achievable.
WHY REMEDY?
Hemp coupled with our exclusive REMEDY Technology™ does not degrade in the stomach, as does ordinary Hemp. Also, our patent-protected technology greatly enhances the transport of Hemp to the bloodstream and then to sites in the body where it can achieve the desired response.

The ABC’s of Hemp Oil

You may (or may not) already know about Hemp Oil. Either way, here are few things you’ll want to know about this incredible little chemical compound called cannabidiol (Hemp Oil). It’s one of over 85 unique compounds found in Hemp that interacts with the body’s central regulatory system. 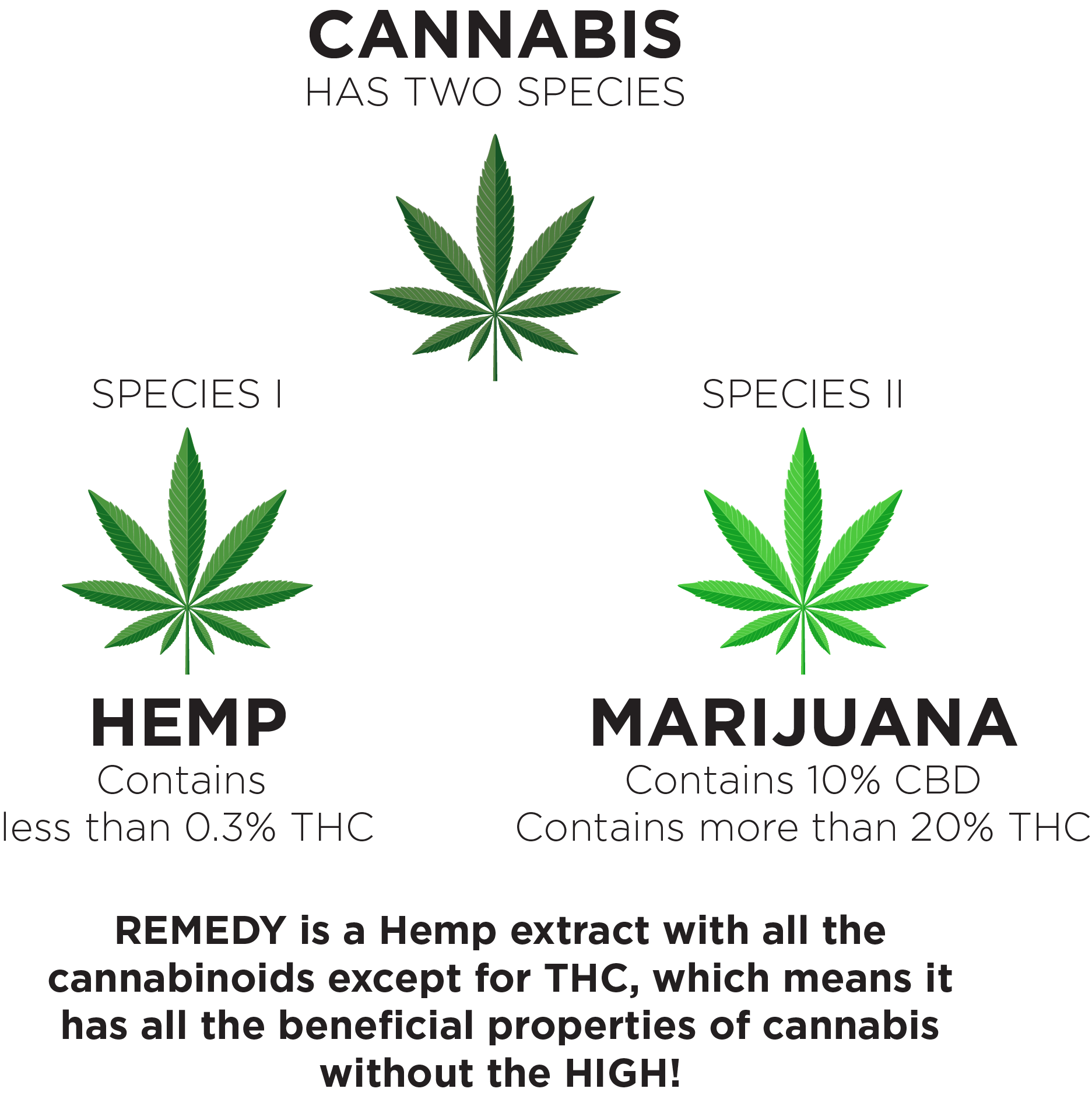 Maybe this will help. Hemp vs. Marijuana (see illustration)

The Cannabis plant has 2 species, and contrary to some misinformation, they are not male and female.

The plants look similar, yet they are very different in uses. Hemp offers all the health benefits without the HIGH associated with Marijuana.

Since REMEDY by GEMINI is a 99.9% pure hemp oil and *contains 0.03%(or less) Tetrahydrocannabinol (THC), it is legal to both sell and consume in the majority of the US states. You may wish to consult your state, province or country for specific laws and regulations.

* Required on site In accordance with US Government regulations and merchant accounts.

Hemp is a non-psychoactive substance found only in Cannabis plants. There is growing scientific support for the proposition that Hemp is found to be a valuable therapeutic for a variety of conditions, from inflammation and pain to diabetes, ulcerative colitis, atherosclerosis and heart disease. * CBD is particularly abundant in industrial hemp.

3rd Party Laboratory tests confirm REMEDY contains less than 0.03%, in accordance with US Government regulations. (Click here to See The Science Behind REMEDY) 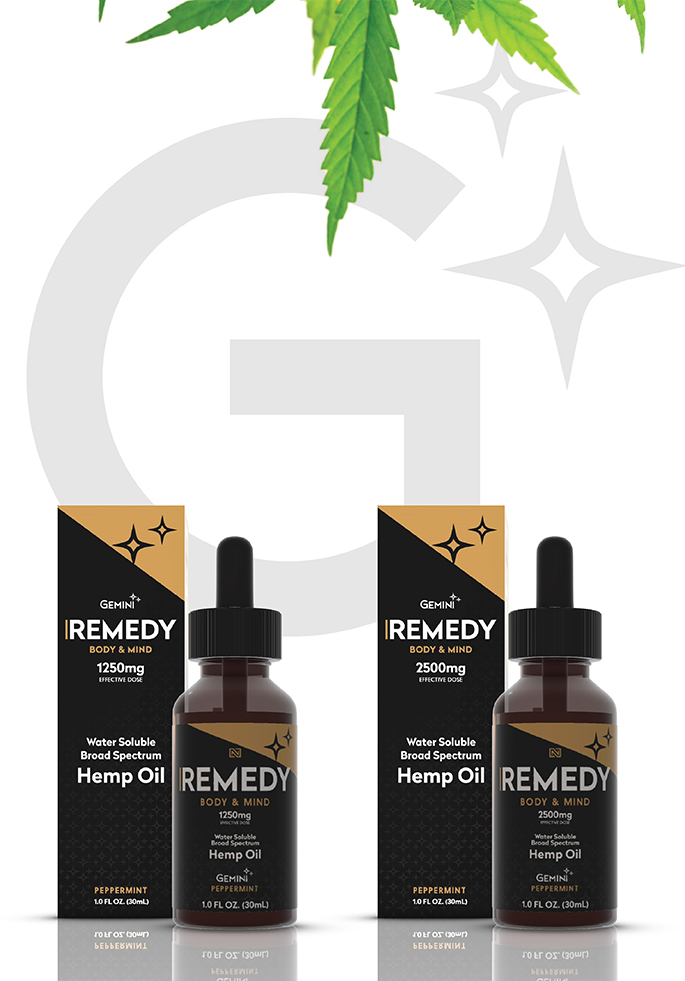 WHAT IS INDUSTRIAL HEMP?

Industrial hemp is defined as a cannabis plant with its parts (stems, leaves, flowers) containing no more than 0.3 percent tetrahydrocannabinol (THC); in other words, minute, sub-psychoactive levels (i.e., not enough to “get high”) on a dry weight basis under Section 7606 of the Federal Farm Bill, or the Agricultural Act of 2014. 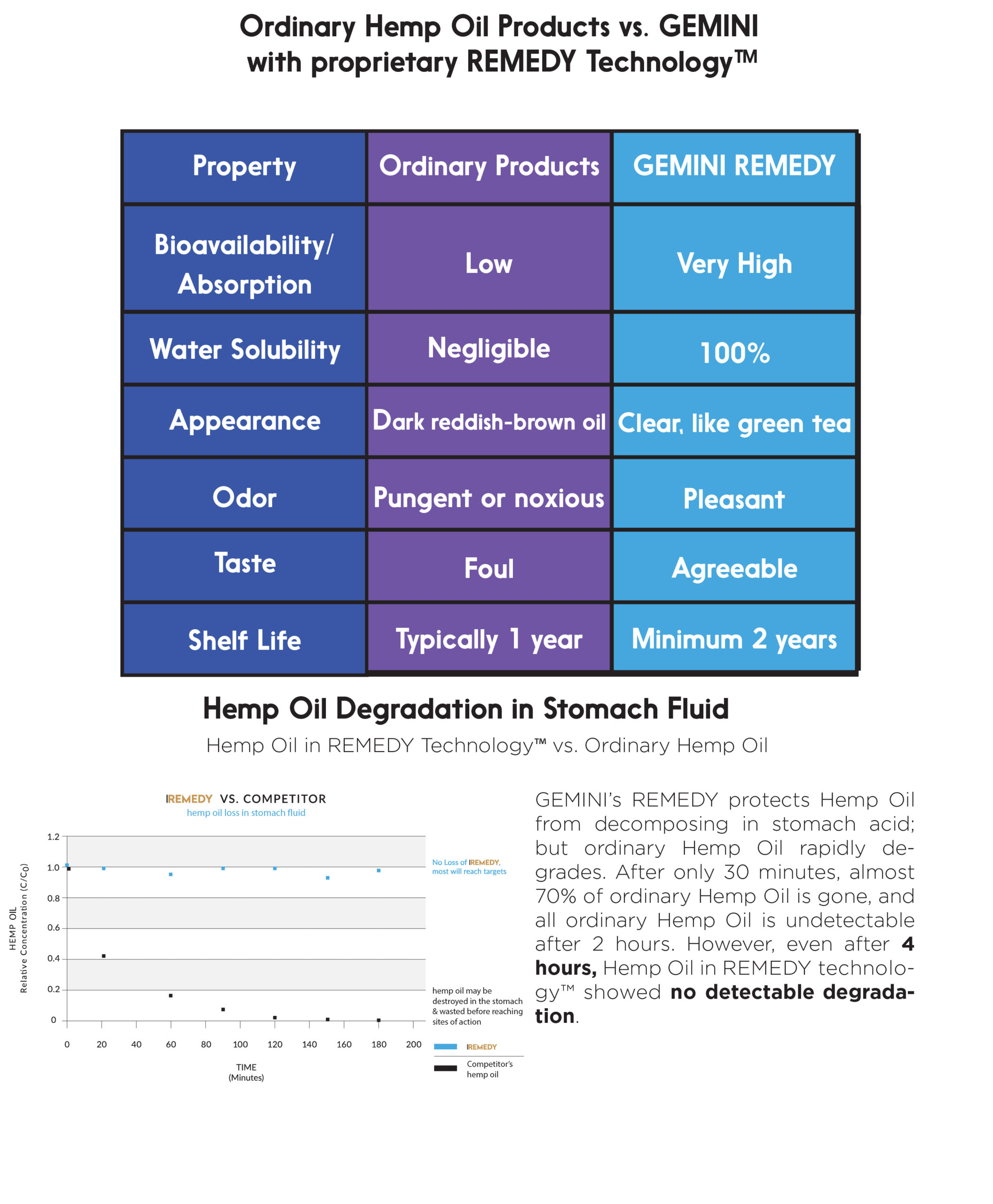 How is REMEDY produced?

Hemp Oil is fat-soluble and thus can be extracted from the leaves and immature flowers of industrial hemp plants. The plant material sits/seeps in the GRAS ingredients biomatrix which is specific to REMEDY. They stain plant material so there is no particulate. This is a proprietary process, which introduces no harsh chemicals to the extraction process. REMEDY is 99.9% pure.

How does REMEDY compare to other hemp oils?

Our unique patented REMEDY Technology ™ significantly amplifies the absorption of hemp oil into the bloodstream and achieves the desired response by the body. REMEDY’s proprietary encapsulation matrix protects the hemp extract and allows it to reach its target. This key aspect of REMEDY helps to ensure predictable and consistent results.

The following chart lists the compounds found in REMEDY.

What are the potential 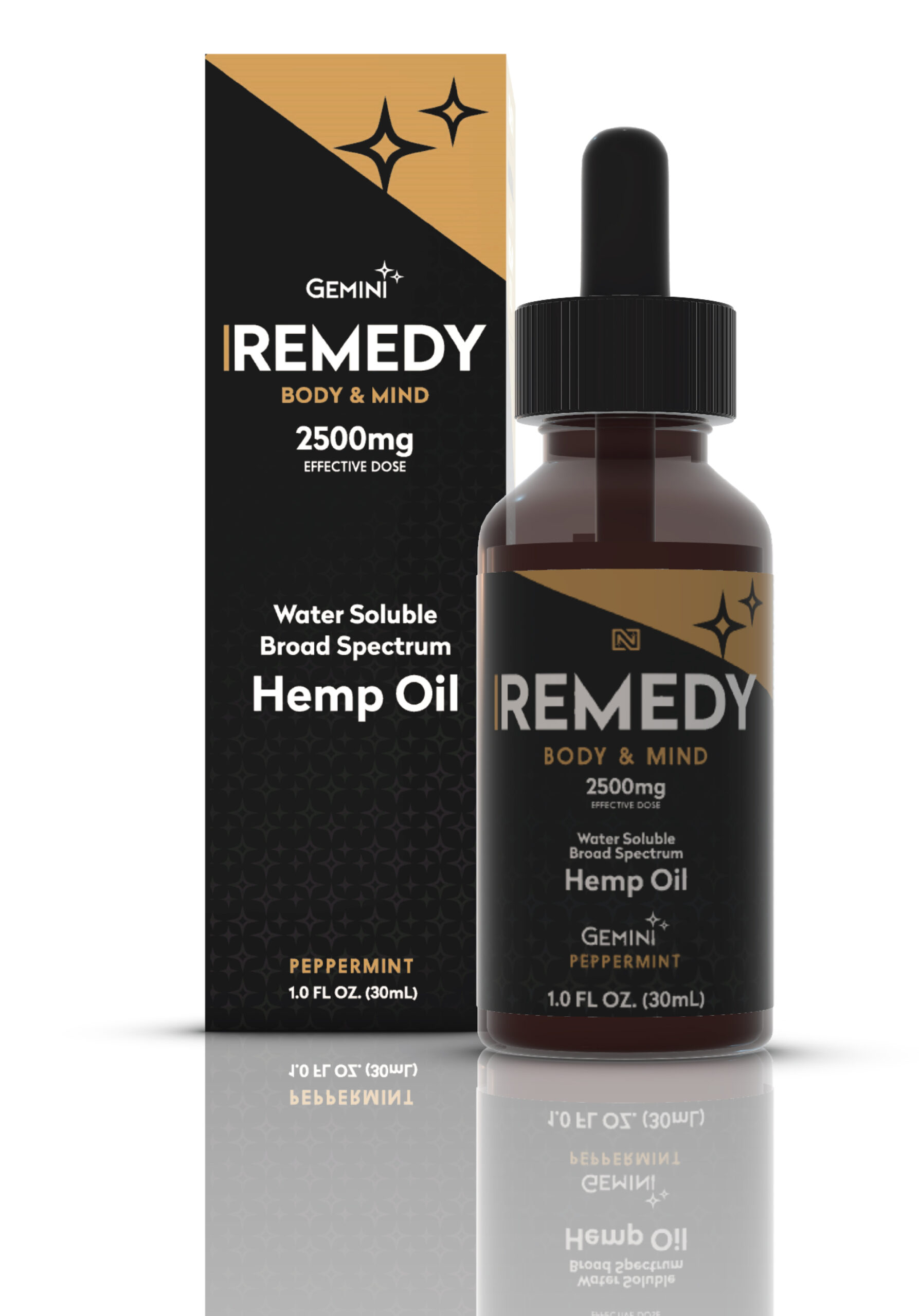 What is the best delivery method for REMEDY?

Place recommended dose directly under the tongue and hold it there for 30 to 60 seconds before swallowing.

How soon will I feel results?

Some people experience results in as little as 5 minutes and others within 15 minutes, last for hours. Hemp oil delivers a relaxing feeling. 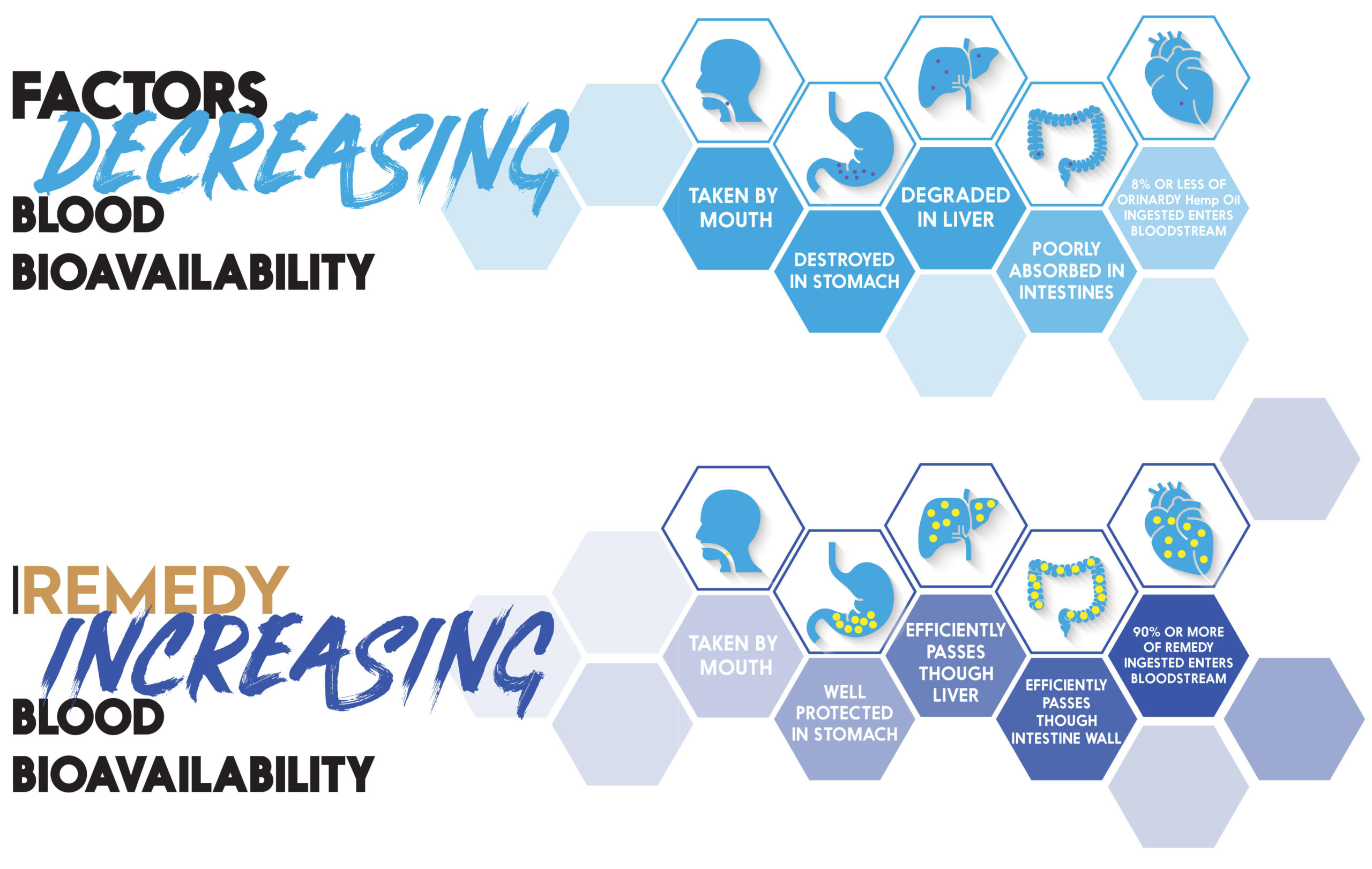 Are there issues with bioavailability of REMEDY?

In this instance, bioavailability refers to the ability of REMEDY to get into the bloodstream after being taken by mouth. Hemp oil bioavailability is inherently low. It is a major impediment to successfully using hemp oil in nutraceutical preparations. Minor amounts, 5 to 6 percent, get into the body with oral administration, and the rest is wasted. This inefficiency can make for unpredictable outcomes, unless exorbitant (and thus, expensive) amounts are used.

A proprietary nanotechnology (the engineering of functional systems at dimensions less than 1/10,000 the width of a human hair) used in REMEDY overcomes the challenges associated with oral administration. The unique process makes it possible for higher amounts of hemp oil to get into the bloodstream, thus allowing for predictable results from REMEDY use. This method also renders REMEDY distinctively water soluble. This contrasts other hemp oil preparations, which cannot be dissolved in water.

See Ilustration to the left.

Will I fail a drug screening from taking Nano-Enhanced Hemp Oil?

Most workplace drug screens and tests target delta9-tetrahydrocannabinol (THC) and do not detect the presence of Cannabidiols or other legal natural hemp based constituents. However, studies have shown that eating hemp foods and oils can cause confirmed positive results when screening urine and blood specimens. Accordingly, if you are subject to any form of drug testing or screening, we recommend (as does the United States Armed Services) that you DO-NOT ingest this product. Prior to consuming these products consult with your healthcare practitioner, drug screening\testing company or employer.

Based upon statements made by the Hemp Industry Association (HIA) and a leading cannabis attorney, Gemini believes that sales of its nanotechnology enhanced hemp oil product, Remedy, can be made in all 50 states.

In a statement to the International Business Times, Robert Hoban, a Colorado cannabis attorney and adjunct professor of law at the University of Denver said, “This action is beyond the DEA’s authority. The DEA can only carry out the law, they cannot create it. Here, they’re purporting to create an entirely new category called ‘marijuana extracts,’ and by doing so wrest control over all cannabinoids. They want to call all cannabinoids illegal. But they don’t have the authority to do that.”

After consulting their legal advisory team, the Hemp Industry Association has stated that, “There is general agreement that yesterday’s ruling did not change the status of CBD.” The HIA noted the following important facts: Sec. 7606 of the Agricultural Farm Act 2014 hemp is defined as distinct from marijuana and does not treat it as a controlled substance.

HIA strongly disagrees with the DEA position and is ready to take action to defend should the DEA take any action to block the production, processing or sale of hemp under Sec. 7606. The Final Rule published on December 14th was not a scheduling action but rather an administrative action related to record keeping for identification of substances on registration forms.
Gemini shall continue to stay abreast of all relevant information pertaining to this matter and keep you updated accordingly.